How Young is Too Young?

Men who date much younger women are like tone deaf singers at karaoke. Both remain blissfully unaware of others cringing on their behalf.

Guys who parade around girlfriends young enough to be their daughters are often mocked, and are particular objects of derision for older women. However, I have never been in that camp. My attitude has always been a blend of "different strokes" and "who can blame them?"

Women in their 20s and 30s are generally less cynical and opinionated than older ones. They also have less flab, fewer wrinkles, and no chin hairs. Age-wise they are at the sweet spot of being past the hormone induced craziness of adolescence and haven’t reached the hormone induced psychosis of menopause.

Granted, objective and anecdotal evidence suggests that dating much younger women is highly overrated, but the older men who go for them don't necessarily deserve blanket ridicule.

Women don’t date much younger men because, statistically speaking, for them it’s usually not an option. Accordingly, mature women resent men who can date the young, along with the young ladies who they perceive as a threat.

When it comes to younger guys who are not complete assholes, can form actual sentences and are otherwise socially acceptable, it makes sense that if women could, they would. Or at least some of them would.

As for men who begrudge other men their pretty young things, perhaps they're jealous they don’t have the, ahem, resources to convince a 30 year old to endure the realities of an older dude. By realities, I mean the unsavory facts of life that women who get hitched to men their own age usually don’t experience until their 60s and 70s.

For the younger woman in it for the long haul, these facts of life will include, but not be limited to, wrinkles, balding, a butt that gets flatter as the stomach gets rounder, viagra dependency, and ear hair.

Absent a perfectly timed fatal car crash, having a much older partner will also mean having to deal with unpleasantness such as cancer, heart disease, and hip surgery. 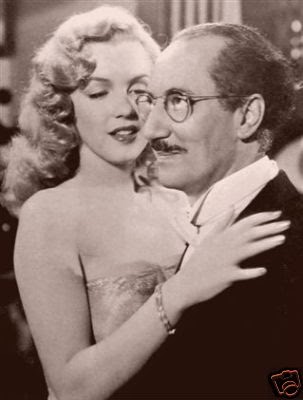 Then there's the potential aggravation of kids from a former marriage, a heinous ex-wife who still gets alimony and, horror of horrors, being called grandma at age 35 when the step-children start breeding.

Older men may also balk at the prospect of more children, or not be able to have them, so the serious minded younger woman must engage in a cost-benefit analysis: is it worth having to shop for Depends at a stage of life when she should be buying Pampers?  For someone without resources, it makes total sense.

I have always looked at these issues as an interested bystander.

Since divorcing, I haven't sought the attentions of anyone so young that it might scandalize my kids. Not that I am adverse to embarrassing them. It’s just that being part of a culture where it is generally not an option to date a man young enough to be my son, I unconsciously stick to men within a decade of my age.

At the same time, I am happy to cheer on guys and the occasional women who are comfortable having daily conversation with someone who has never heard of Fleetwood Mac, or Earth Wind and Fire.

Recently, I had an unexpected and unsolicited glimpse into their world.

It was with a young man named Mark. He stood over me on an airport shuttle in the midst of my ravenous assault on a veggie sub. Hoping he would move to the next aisle, I pretended not to see him and stayed on task. However, he continued to hover, smiling, until I reluctantly moved the bag on the seat next to me.

As he settled in, I silently prayed for the silent type. It had been a long food deprived flight, and I was not in the mood to make nice. But, alas, despite my aloofness, Mark cheerfully chatted away.

He was funny, smart, attractive, and we had many common interests. Like me, he wasted time writing blog posts that hardly anyone reads, and he even liked Fleetwood Mac! I was especially charmed that he was more amused than disgusted by my chowing down like a labrador who hasn’t eaten in a week.

He seemed on the younger side but, maybe not that young, whatever that means. It felt like we were contemporaries.

When the ride ended and he suggested we continue our conversation over drinks, I was game.  It was a complete blast and time flew. After a couple of hours, we said good-bye and promised to read each other’s blog (hi Mark!)

Later that night I received a text from him that was completely unintelligible. It included unfamiliar acronyms and words like “chill” and “kick it”  -- terms that may as well have been Arabic, but which I’ve heard my kids use.

It dawned on me that maybe Mark and I were not exactly contemporaries.

Our specific ages never came up, but I had talked to Mark of my daughter in college, working in Miami in the late 1980s, and visiting Berlin before the wall went down, so to me it seemed obvious. Not to mention that I look exactly like what I am, a middle aged woman.

Not so with Mark. His look was more ambiguous and he hadn't referred to experiences that would suggest his age. I figured early 40s.

I read Mark's text to my daughter who translated: “mom, he’s totally into you and wants to know if you want to go out." She added, "you should totally go.”

So much for the pleasure of scandalizing my children.

Yet, I hesitated. Mark was obviously younger than me but, hey, he was a Fleetwood Mac fan, so he couldn’t be that young.

It was a lovely evening. Mark was fun, thoughtful, and one of the nicest people ever. However, as the night progressed, being with Mark felt like communing with a native of a remote island who speaks a different language — exotic and interesting, but someone who would always seem foreign.

That night with Mark, I learned what that young means to me.

I don't know Mark's exact age and I actually don't want to know. I cringe every time I think about it. But he is not in his 40s ...  or probably even in his 30s. The light finally went off as Mark described a bar that he and his friends went to the previous night:


The music was great, but we left early because everyone there was like in their 40s and 50s!

I nodded sympathetically, “yeah that sounds, like, totally lame.”

Later, as we said good-bye, I casually asked Mark,

Hey, what did you say the name of that place was? The one with the great music and people in their 40s and 50s?

Gawd, what I would give for the blissful unawareness of the tone deaf karaoke singer.

Posted by rockymountainmiamiam at 7:30 PM