Hot and Crazy, It's In Our DNA 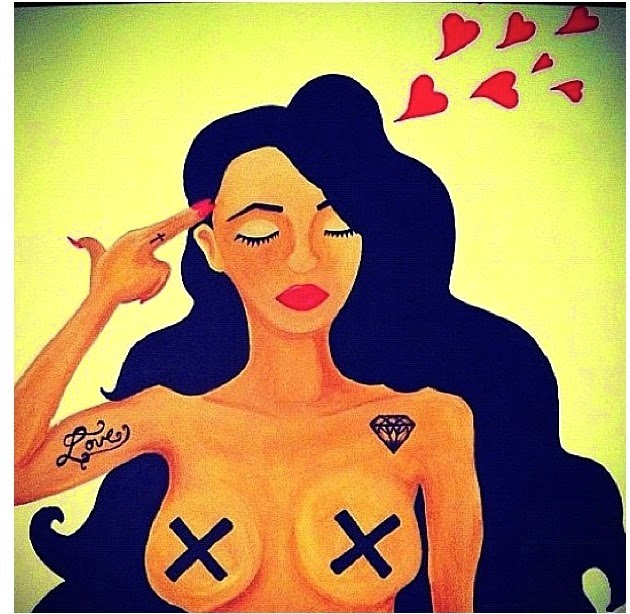 The ideal female is "smokin' hot" and only a little deranged.

That's what I learned from the wildly popular Hot Crazy Matrix YouTube video.

In the video, “the Expert” instructs men how to select a woman. He uses a graph with one axis for “hot” and the other for “crazy.” The hot axis is scaled 1-10 and the crazy axis ranges 4-10 because women less than a 4 crazy simply don’t exist.

Women, on the other hand, rate men based on looks and money. If rich enough, a woman will go for a guy regardless of any shortcomings. Yes, ladies, that means we are all prostitutes whose services, for the right price, can be bought.

As an aside, given that he is a self-satisfied, squat little troll, hopefully he has a lot of money. That dude is not getting any action for free without a fight.

Is the video sexist? Definitely.

Offensive? Most certainly.
It is obviously meant as a joke, but is it funny? Oh yeah.

Of course, I am a less than evolved barometer of humor. I’ve already admitted in a previous post to laughing the day our dog was almost eaten. Dumb blonde jokes crack me up. I chuckle just thinking about the scene in RV, where the dad gets sprayed with poop, and nothing cheers me up like the tampon-in-the nose scene from She’s the Man.

If a guy doesn't think A Christmas Story and Zoolander are hysterical, sex is out of the question and probably even friendship.

Yes, I have the sensibility of an average 14 year old boy.

Humor is often used as a cloak to express socially inappropriate and hateful beliefs. We all know someone who denies being a loathsome racist because, hey, that one about the nigger and the jew was just a joke, come on, lighten up.

Is the hot/crazy video in that category of ugly humor?

I don’t think racist jokes are amusing, and have been accused of sanctimony for not seeing the humor in another Pollack remark. Yet, I can’t help but laugh at the Hot/Crazy Matrix, which seems to demean and objectify women. As a woman and mother of two girls I must be crazy for not being outraged.

But then again, humor is also often used to state uncomfortable universal truths. Maybe I am not seething with righteous indignation because I unconsciously suspect the Expert is right. Perhaps something about XX chromosomes really do make women act nutty. 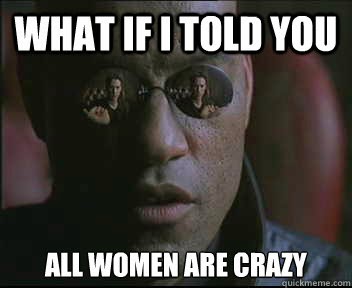 If so, does that mean men are genetically predisposed to be attracted to crazy? Have unhinged females, somewhere in the process of natural selection, helped insure the survival of the species? Do males flock to crazy chicks in the same way some claim to be evolutionarily programmed to spread their seed?

If yes, that explains a lot.

Although I may have a stunted sense of humor, I’ve never considered myself crazy. As the voice of reason, I thought basic sanity to be one of my more appealing qualities. However, if nature dictates that men are actually only attracted to women with a certain threshold of luny, that means I do not fall anywhere on the hot/crazy matrix. It means I am a genetic freak. Oy!!

All this thinking about crazy was making me crazy, I needed an expert opinion, pronto.

John is an old friend and long-time single guy with a history of dating crazed women. Definitely an authority. Wanting an honest answer, I waited to ask him one night after he had a couple of cocktails.

“Is it true, are men turned on by crazy women?” I asked.  John hesitated, as if deciding whether to divulge a trade secret. It took awhile, but he eventually came out with it, “well, um, yeah, sure, crazy is sort of sexy.”

The revelation was sobering, and yet a relief.

This explained a lot, such as my ex-husband’s preference for certifiably insane women. I had always thought he was the unbalanced one. But no, it was me. I was the one lacking. Of course, I was missing the crazy gene!

The Expert teaches that any guy who thinks he’s dating a woman who is hot and not crazy must actually be dating a “trannie.” Oh, the horror. As a 100% sane female, I was in the same category as transexuals, except for the hot part. Nothing against transexuals, but for a woman, this is not good news.

As I sat with John and considered my newly discovered defect, I could tell he was considering whether to say more. I waited, too distraught about being sane to talk anyway.

Finally, with all due sincerity, John quietly said, “Mahlia … if it makes you feel any better, you are definitely a 4 crazy, maybe even higher. 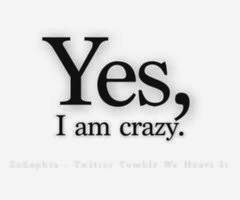 P.S.  My description of the Expert was unkind. Of course, my comments about him being troll-like and all were meant in good fun, just like his video. In fact, I'm sure that deep down he is a nice person. If he's not rich, I wish him the best of luck in finding a smokin' hot crazy woman who is missing the superficial, greedy, user gene that the rest of us girls have.

Posted by rockymountainmiamiam at 10:19 PM